When I had decided earlier in 2015 to start this challenge of marathon or longer in all 50 states, Kaela and I were in the process of planning a vacation to Hawaii. We had talked about trying to plan around a race in Hawaii, as it was a large vacation and we weren’t sure when we would be heading back to the middle of the Pacific. So we planned to spend 2 weeks in Hawaii, with the first thing on the list being the JTB Maui Marathon. On paper it seemed like a great idea of traveling and getting the marathon out of the way to then enjoy paradise. If only it had actually played out like it did in my head. Now when I’m asked about the Maui marathon, I say it was the most beautiful but brutal marathon I have ever run. Why do I say that you ask? Lets start from the beginning.

Race: JTB Maui Marathon
Location: Maui, Hawaii
Date: 9/20/2015
Finishing Time: 5:50:04
For our vacation we wanted to visit Oahu, the Big Island, and end our trip in Maui. Since the race was in Maui, we decided to fly into Maui for race and then after race “start” our vacation by heading to Oahu. The day before the marathon we flew from Columbus to Maui, with a layover in Phoenix. I was lucky enough to get exit row seating for both of our flights which helped keep my legs loose. Nutrition was somewhat of an issue as it is hard to find great foods in airports, but I made it work.  After landing I realized our car rental location was 30 minutes away from airport. I quickly booked another car at the airport and went to pick it up. We got checked in quickly and were told to wait outside and the car would be pulled up for us. 5 minutes went by, still no car. 10 minutes. 30 minutes. At this point I was getting worried about making it to the expo in time to get my bib.
We finally get our car and start making our way to the resort area just north of Lahaina. The normal 45 minute drive took us almost 90 minutes. My nerves were on edge, stressing myself out about all these things that I had no control over not falling into place. I made it to the expo about 30 minutes after “closing” and the only thing left were two people handing out bibs. Luckily, they were told about the crazy traffic and were staying later to help out. We checked into our hotel and headed over to race dinner for all you can buffet to get final bit of carbs before the race. But at this point, I had stressed myself out too much and eating became a task to get food down comfortably. I ate what I could and then we took a stroll back to our hotel. After 11 hours of flights and few hours in a car, I was finally able to lay in bed to get some sleep around 10pm local time.
It felt like I had just gone to bed and then it happened. BUZZZZZZZZZZZ!!! My alarm went off at 2:30am to try and get some final carbs in my body. I sat outside listened to the waves crash against the shore while I ate a few PBJ sandwiches. The race start was back near the airport, so we left the hotel at 3:45am traveling the dark roads heading to the 5am start. Except we didn’t know exactly where the start was. We knew it was at the Queen Ka’ahumanu center, but that was a mall with no specific point of entry we could find. I frantically looked it up on my phone as we got closer to see best way but with street names we couldn’t pronounce and lack of sleep it was not going well. With about 5 minutes to spare we found a parking lot full of cars and assumed this had to be the place. We parked, saw some runners walking up a road, which ended up being where the starting line actually was taking place. Long travel the day before, little sleep, and even more stress in the morning, but I made it to the starting line. I gave Kaela a kiss, started my GoPro and waited for the horn to signal the start.

As I started, the typical morning rain came through and it actually had a calming effect on me, keeping me balanced and focused at the long journey of 26 miles and 385 yards that was to come. The marathon course was a straight forward point to point course from Kahului to Lahaina with only 5 total turns . We started in Kahului and headed down a few roads in a residential area, before heading out on Kuihelani highway. I spent the first few miles trying to get my legs loose while also trying to watch my step since, after all, it was still pitch black out. Once we got turned on Kahului highway, we were given a lane and a shoulder to run in. After a few miles, I started to notice the sun rising directly behind us. As the sun rose, the rain stopped bringing a beautiful rainbow and amazing colors in the sky. 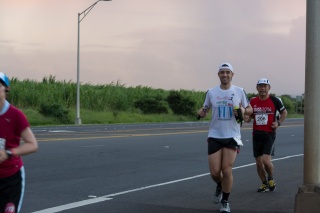 Since it was a point to point course heading to Lahaina, Kaela was able to drive the course and see me throughout the race. I first saw her just before mile 7 being her cheerful self as she took some pictures of myself and other runners. She was also a big help providing nutrition throughout the race so I didn’t have to keep a lot on me. After grabbing some coconut water I made the turn on Honoapiilani highway. This road would be my home for the next 15 miles!

We continued to run towards the coast before overlooking Maalaea Bay. Around mile 9 I had reached the only portion of the course that had any sort of real elevation. As I climbed, the only thing on my left hand side was the Pacific Ocean. I found myself just staring off, watching the waves crash against the island. The crystal clear waters were absolutely breathtaking. I had to keep myself focused on the task at hand not get overwhelmed with the beauty. Over the next few miles there were some steep rolling hills. It was more than I had expected from looking at the elevation chart before the race. Not only were the hills a surprise, I did not take into consideration the strong wind gusts that come on this section of the island. There were times that I felt like I wasn’t even moving at all when the wind would blow. Between the steep quick hills and the wind, my energy was depleting quickly.

Close to mile 12, there was a small tunnel that was cut through the rocks. This is the point in the race that everything had changed. For most marathons, I treat it as the single race that it is. This race did not follow that same structure. Up to this point, there was some rain, strong cool winds and rolling hills. After there was hot temps, strong sun, and not even a slight breeze. It was like it was designed to be treated as two completely different races.

Just a few hours into the race and the temperatures had increased over 20 degrees into the mid 80’s, with the sun baking my back on a cloudless day. I made it to half way point before having to change up my game plan for pacing. I felt like I had nothing left in my tank and still had half of the race left. The new plan was to just keep moving forward, whether it was running or walking. Having beautiful beaches on my left and expansive mountains on my right were a great motivation to keep on going. Putting one foot in front of the other, I continued up the coast passing beaches, fruit stands, and plenty of Hawaiian beauty. Kaela met me at a few more mile markers but the one that stands out was right before mile 18. She had been standing for a while waiting for me to arrive after seeing me a few miles before, but she still greeted me with cheers and words of encouragement. After I had seen her, it made me realize that even though the race was not going like I had hoped, that we both were experiencing this together. 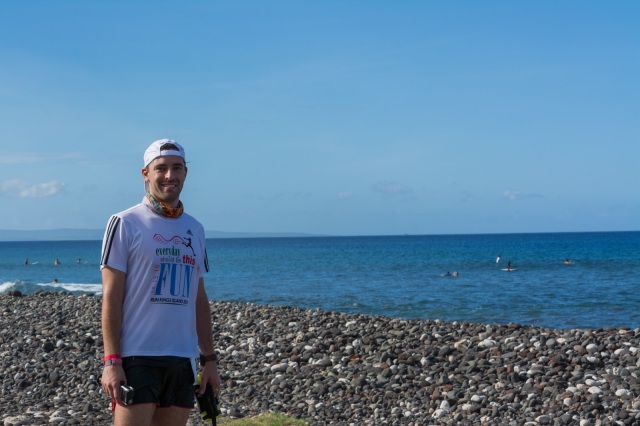 A little after mile 19, my run and walk pacing plan, turned into a walk and crawl plan. The fatigue from travel was really starting to set in and there was nothing I could do to combat it. I kept my head up the best I could and just reminded myself to keep putting one foot in front of the other. From the main highway, the course cut down a neighborhood street that took me to downtown Lahaina. An hour early the streets would have been crowded with people cheering on runners as they made it to the final 5k of the marathon. But I had taken to long and the only people to see were a few tourist walking between the shops enjoying a morning stroll. It hit me hard, not only was I alone on a closed road but there wasn’t even anyone there to lift my spirits and keep me going.

(If you ever wondered what disappointment looked like)
After leaving Lahaina, I made it back to the main highway for the final 2 miles of the race. The sun felt even stronger and my body hurt more and more with every step. I can’t say I remember much of those miles as it took everything I had to just keep moving forward. I do remember the final turn before heading into the finish. I glanced at my watch and realized that I had only 1/2 mile before crossing the finish. I told myself that I would not walk this and I would cross that finish line running, and that is just what I did.
5:50:04. Over an hour longer than I wanted to be on that hot, miserable, brutal, but beautiful course. As I crossed the finish, I didn’t even notice that Kaela had made her way into the finish coral to greet me and to tell me how proud of me she was. She had grabbed me some fluids and food knowing the shape my body and mind were in. I found some grass in the shade and took a seat to catch my breath and collect my thoughts from the past 6 hours. 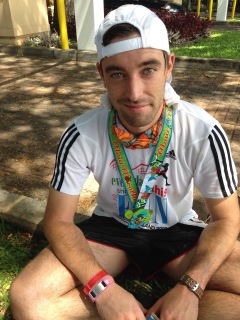 This race taught me to never take my fitness for granted. It’s just another marathon, I had told myself. Rest and proper nutrition won’t matter that much since you have done this so many times before. All LIES. I did not set myself up for success and I got everything I deserved. I have told many people that if it wasn’t for the most spectacular views I’ve ever seen during a race, I may have dropped out. But I am so glad I didn’t because it made me a stronger runner and better person for going through the valley. There were only 537 finishers for the 2015 Maui marathon and I can proudly say that I was one of them!

Now just as a fun little extra info. After I crossed the finish line, we were supposed to start the rest of the vacation. Lets just say that one missed flight, long security line at airport, and almost a second missed flight, made for a hectic start. We did, however, end up making it to Oahu and having an amazing vacation.Be sure to check out my GoPro video of the race below. Next stop, Kaela and I headed to North Carolina for a different type of marathon. Hitting the trails of Medoc! 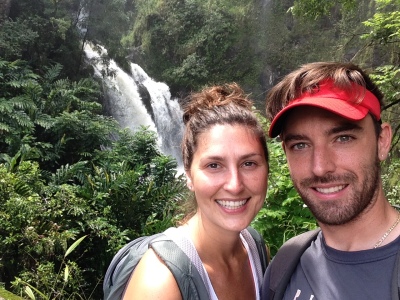